Many events took place across the city on election night, but possibly none quite as unlikely as the launch of a book of photographs of images of people driving cars in the 1980s. This was the latest edition from the boutique publisher Hoxton Mini Press, who specialise in books that document East London lives. Previous editions include photos of swimmers at Hackney Lido, and pictures of mothers with one-day old babies.

The collection was shot by East London documentary photographer Chris Dorley-Brown in four hours. One day in the summer of ’87, he set out to shoot some images of the privatisation of Rolls Royce – a key moment in Thatcher’s government. However, on the way, he started shooting random drivers caught in traffic. When he arrived in the City, he only had one shot left on his roll of film which he used for a ‘cursory’ shot of the bankers arriving for the sell-off.

28 years later, Ann Waldvogel from Hoxton Mini Press saw some of the images on the photographer’s Flickr page. Her partner Martin Usborne encouraged him to look into his archive to see if there were more and the result is this photobook, which is fascinating and beautiful in its mundanity.  A BMW driver examines an A-Z, a suited man, travels on an otherwise empty bus. 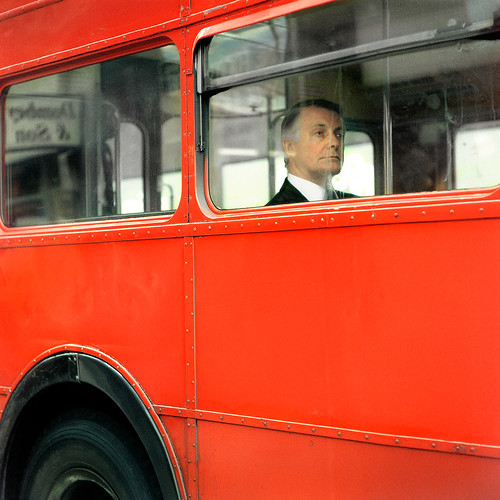 Of course, the haircuts, jewellery and clothes are what you’d expect from the late ’80s, but these are not overplayed. Dorley-Brown says that he tried to drain the pictures of nostalgia, and as a result the remaining details evoke deeper memories of the period. The signage is perfectly vintage – a BT van has cheap vinyl stickers on its door, while a delivery van has used metal hardware shop letters on its panelling. It seems that parts of cars had different purposes in those days – rear view mirrors were just there to hang decorations from. 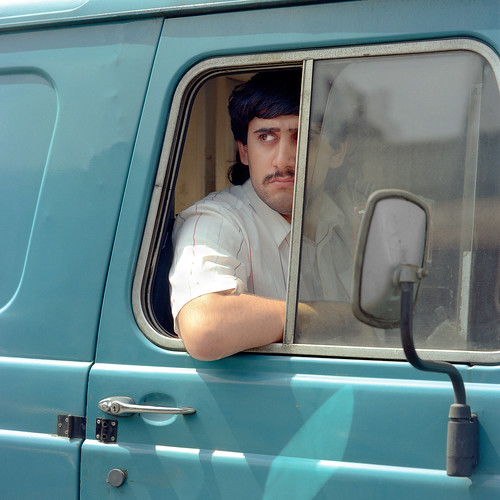 What makes this book so successful is its implicit political nature. This is a collection that invites us to reflect on Thatcher’s Britain. In one image, Jimmy Tarbuck gleefully promotes microwave ovens from the side of an empty bus which has stopped next to an advert for Panasonic VHS players. Sandwiched between the bus and an empty coach is a man sitting alone in a Mk1 Vauxhall Astra going nowhere.

The launch was held in the Classic Car Club in Pitfield Street, and Usborne had a Q and A with Dorley-Brown surrounded by an astonishing collection of vintage vehicles. The photographer expanded on his work since. He continues to look at East London, making his images for an audience that is not yet born. When asked about a contemporary counterpart to the book, the photographer said that it would be near impossible to do a collection of ‘Drivers in the 2010s’. For a start, people don’t lower their windows anymore – they use air conditioning instead. I’m not so sure. It would be different to the original, but I imagine its detail and banality would make it fascinating for an audience in 30 years time.

As the Q and A turned to the politics of the book, one member of the audience noticed that the images that the photographer had framed were in election colours, red blue and yellow. Then, almost as if the spirit of the iron lady had burst into the room, the image of the red car toppled over, and the yellow car fell to the floor. Only the blue one stayed standing. Chris Dorley-Brown’s images turned out to be more prescient than anybody anticipated.