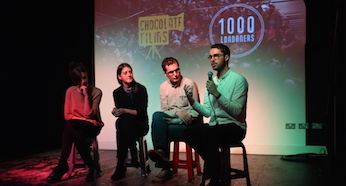 Still riding high off the back of our NIGHT CRAWLERS week earlier in the month, last night saw saw the opening night at the Hackney Attic of our second 1000 Londoner’s Movie Nights instalment; London’s EASY RIDERS.

By 6.45pm, we were catching up with the Spectre crowds as we had a full house (the emergency chairs were out!). Chocolate Films filmmaker, Ross Dickson, was the host for the evening, looking more comfortable in his new role of master of ceremonies (and comedian!).

There was lots of laughter throughout the films, not just because of the peppering of offensive language (perhaps someone in the Q&A should ask what VCMC stands for?), but also because of the archive footage. Hand picked to be shown alongside the films, they are actually very funny. Look out for ‘80’s hipster cyclists (could almost have been shot last week!) and the odd cyclist contra-flow animation seemed to be something that wouldn’t look out of place on Brass Eye! The archive was interspersed throughout the films and fitted in so well.

It was so great to see to many of the Londoners and indeed the filmmakers in the crowd; we had VCMC’s Gemma and her full girl biker squad, moto-cross rider Jay and his filmmakers from Select 18 who made the film and Alex Osmond, filmmaker to Dick.

What a great way to start the EASY RIDERS week. We’re all excited to show the films in the other venues across London (full listing below). Thanks to our partners the Londonist and BFI, and of course to the wonderful venue hosts for the evening, Hackney Attic. Now over to the Exhibit, Balham for tonight’s show!