The Mural Trail – Where to find Londoner Brian’s Murals 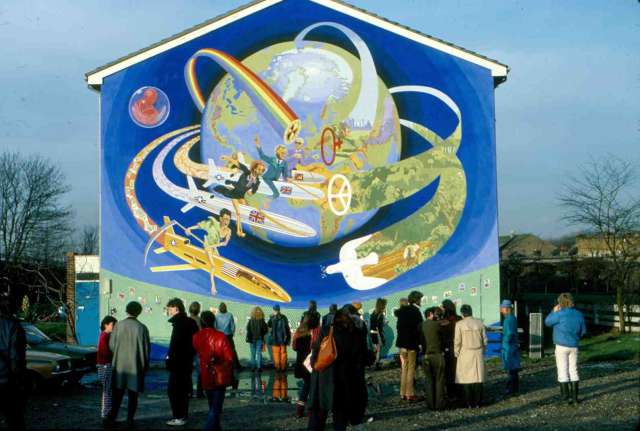 In tandem with the release of our new Londoner Brian Barnes, here is guide to where to find Brian’s striking murals:

The 25 square metre mural depicts a large skeletal figure standing astride the city of London as a nuclear bomb goes off behind. Below him safely sheltered inbunkers below the Houses of Parliament sit the Government including leaders of the political parties of the time, the Prime Minister Margaret Thatcher,Ronald Reagan and Prince Charles. (London Mural Preservation Society)

Five of the area’s former politicians are portrayed: John Archer, Mayor of Battersea in 1914 and Britain’s first elected politician of African descent; John Burns, trade unionist, socialist and Liberal MP for Battersea from 1892 to 1918, arrested, tried and acquitted in 1896 after a demonstration against unemployment ended in a riot during which the windows of the Carlton Club were broken; Shapurji Saklatvala born in Mumbai, but elected as Communist MP for Battersea North in 1922 and jailed for two months in 1926 for making a speech supporting striking miners; Baron Douglas Jay, elected Labour MP for Battersea North after winning a 1946 by-election, who went on to retain the seat for an astonishing 37 years until 1983, and who unveiled the mural on 10th August 1988; Alf Dubs, originally of Jewish Czech descent, who arrived in Britain on the Kindertransportand went on to be a local MP in 1979, first in Battersea South, then in the combined post-1983 Battersea constituency which he held until 1987.

The mural reflects much of the local history. There is a picture of James Bond, a reference to the fact that actor, Roger Moore, who played Bond in seven of the movies, grew up in Stockwell. Artist, Vincent Van Gogh is included as he spent six months living in the area. There is a picture of the MV Empire Windrush boat; many of the people who came to the UK on this boat settled in the area. A London Underground tube train also features on the mural as Stockwell is one of the earliest tube stations.

NEW CROSS Riders of the Apocalypse (1983)

The brightly coloured mural features caricatures of former Prime Minister Margaret Thatcher, the then head of state of the USSR Yuri Andropov, ex US President Ronald Reagan and former Secretary of State for Defence Michael Heseltine looping around the globe on cruise missiles, dollar bills and pound notes in their wake, on a collision course with the CND peace signs and white doves.(London Mural Preservation Society)