Brian is passionate about his community and the role of art for political change. Trained at Ravensbourne College and The Royal College of Art he has never looked back, remarking  “what else would I have done, flower arranging?”  Since then he has been painting murals for over 40 years and was recently described by Time Out as an “uber-muralist,” due to his large scale paintings and prolific work.

Brian introduces us to his infamous mural from the 1970’s The Good the Bad and The Ugly (1978) a 276-foot mural painted on the wall of the Morgan Crucible Factory on Battersea Bridge Road. The mural was created with 60 members of the community but was controversially demolished only a year after it was painted by the Morgan Crucible Company. To this day Brian still holds on to last remaining painted bricks in his studio.

As you walk round South London today, Brian’s murals are still a striking presence in the community. Brian’s commitment to nuclear disarmament is still visible through his murals Nuclear Dawn (1981) in Brixton and Riders of the Apocalypse (1983) in New Cross. In Battersea, the inspiring Battersea in Perspective (1988) still stands on Dagnall Street and in Stockwell, commemorating the locals who gave their life to war,  is the Violette Szabo Mural (2001). 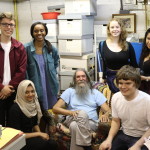