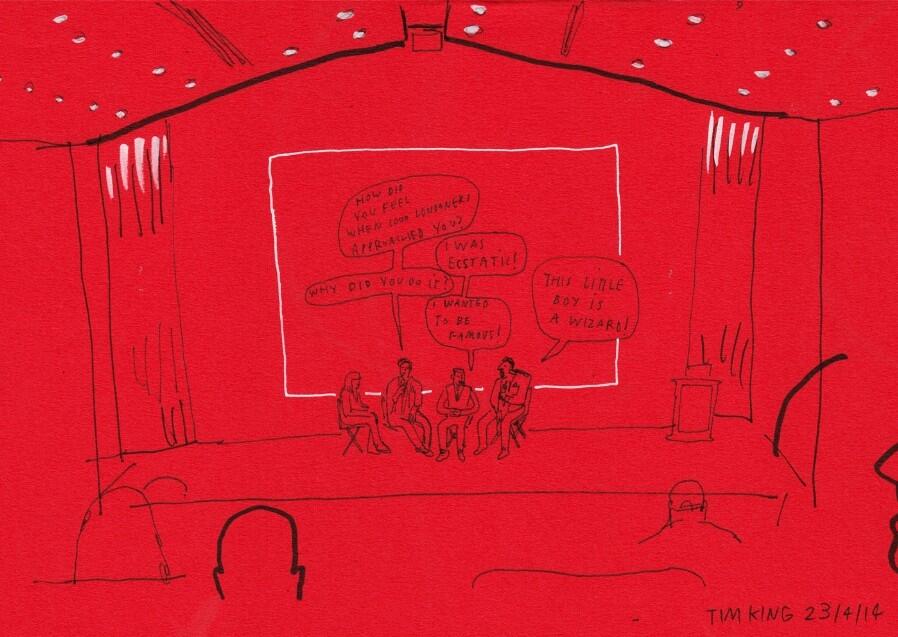 Last night we launched the project on a great night at BAFTA. Our on-site illustrator was Tim King, and can probably tell by the photos that we enjoyed it. This is how it went down.

It kicked off with one of our 1000 Londoners filmmakers’ Laura Kloss introducing the event, seamlessly moving on to Creative Director Mark Currie’s overview of the project. We then watched the first 10 films in a row – interestingly dubbed “1% of 1000”. Then there was a demo of www.1000londoners.com capably led by filmmaker Reece Lipman and finally a Q & A featuring questions from the audience to filmmaker Nick Shaw and Londoners Frank and Martin.

As ever, it’s so hard to pick a favourite moment but the image of several of the Londoners in the same room, mingling afterwards in the BAFTA bar is a pretty enduring one. Like John sparring with Martin in an imaginary intercultural, intergenerational cage fight. Or our young magician Frank showing some close-quarters magic to Griff – proving that those with two tours of Afghanistan under their belt can still be surprised by a bit of sleight of hand.

Well attended by prominent Londoners from the media, cultural and charity worlds – including radio presenter, Vanessa Feltz and film director of Nanny McPhee, Susanna White, as well as the extended Chocolate Films family, it made us hugely proud to be able to show the project off on such a grand stage. To see the work come together was immensely gratifying and as Mark said on the stage. “This is only the beginning.”